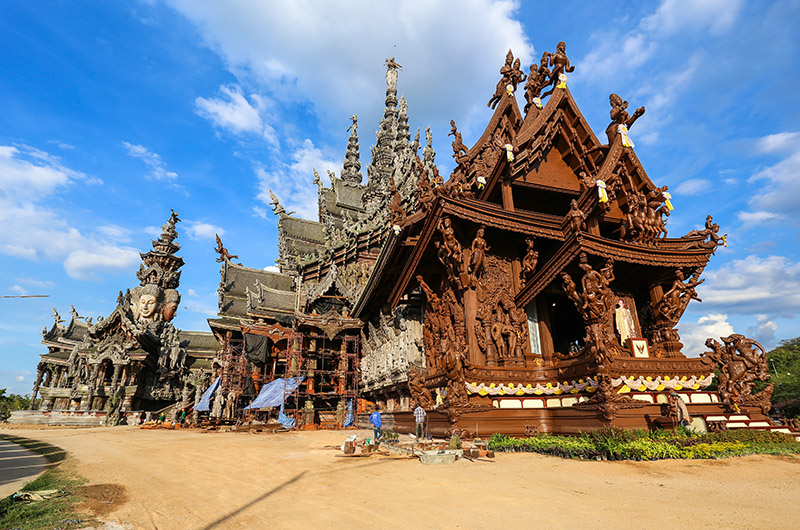 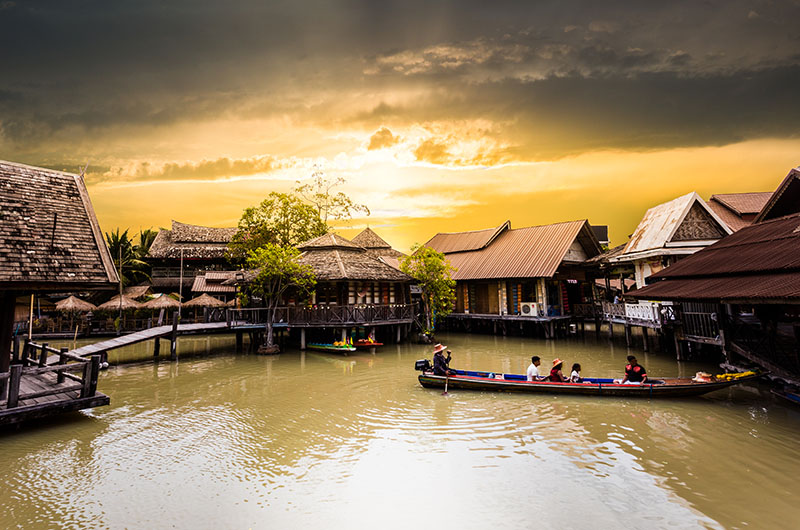 Visit Wat Pho (Temple of the Reclining Buddha), founded in the 16th century, the oldest and biggest temple with the largest number of pagodas (95 in all) in the city.

Arrive to Bangkok Airport, meet and greet with local guide. Then transfer to the hotel for check in and give some more information about your trip in Bangkok.
Overnight : Bangkok

Depart from hotel to Rattanakosin Island, the original area of Bangkok when it was first established as the capital over 200 years ago.

Visit Wat Pho (Temple of the Reclining Buddha), founded in the 16th century, the oldest and biggest temple with the largest number of pagodas (95 in all) in the city. Wat Pho was the first open university of Thailand which offered courses in several branches of knowledge like literature, astrology, medicine and massage. It’s well known for its huge Reclining Buddha, 46 m. long and 15 m. high.

Visit Wat Phra Kaeo, the most beautiful and important Buddhist temple in Thailand. It is so richly and intricately decorated that, once entering the temple, you will feel as if you are in a real ’city of angels’.

Visit The Grand Palace, an area of 218,400 sq. metres and is surrounded by walls built in 1782. The length of the four walls is 1,900 metres. Within these walls are situated government offices and the Chapel Royal of the Emerald Buddha besides the royal residences.

Visit to Wat Arun, the Temple of Dawn, is one of Bangkok’s best know landmark. It stands on the west bank of the Chao Phraya River in Thon Buri. Wat Arun is best seen from the opposite bank of the river; it glistens in the sunlight during the day and stands dark and noble at dawn or dusk. A visit to the beautiful, peaceful monastery complex surrounding the familiar towers is very worth-while. These towers, the Phra Prang, although best known, the only part of Wat Arun. It also contains narrow lanes; elegant, old white buildings; shrines, pools of turtles; and two fine giants, Yuk Wat Jaeng, mortal enemies of the Yuk Wat Po across the river.

Continue to visit magnificent frescoes and Giant Swing out front.
Located in front of Wat Suthat, it was formerly used in an old Brahmin ceremony.

Hike up to the The Golden Mount to pay respect to the Buddha’s relics. The platform on its top level is still a great place to enjoy a 360-degree panorama of Bangkok’s old district.

The Golden Mount, is part of the Wat Saket temple located just outside the old royal city precincts, next to the Pom Mahakhan fort. The Golden Mount was the tallest structure in Bangkok and it’s also used to suspect fire accidents.

Continue to visit Wat Benchamabopit or Marble Temple, one of the most modern works of Thai religious architecture. Graceful and tranquil, it is famous for its main chapel built in white Carara Italian marble to house a replica of Thailand’s most beautiful Buddha image, Phra Phutthachinarat.

Transfer back to hotel. Free time at your leisure
Overnight : Bangkok

Depart for Damnoen Saduak, situated 110 Km. west of Bangkok. Your journey commences with a leisurely drive through rice paddies and salt fields.

Arrive Damnoen Saduak Floating Market. Here you will be fascinated by boats of various shapes and sizes used by local merchants to ferry their goods. Your are able to hire small boat board along the market for shopping local products. [small boat is not included]

Enjoy a spectacular show of Crocodile Wrestling between man and crocodiles are also offers. The farm of more than 10,000 crocodiles is acclaimed to have one of the cleanest and most impressive public crocodile displays in the world. (by CITES)

See the Greatest Elephant Show in Thailand, an elephant show complete with dramatic sounds and narration Watch a ceremonial rite to bless the buffalo hide cord before hunting the elephants. Be entertained to football jumbo cup, dancing and at play from well-trained cutes. And re-enacting Yutha Hathi, an ancient battle scene on elephant back in full battle gear.
Overnight : Bangkok

Depart for Ayutthaya, located 76 kms. north of Bangkok. It was one of Indo-China’s most prosperous cities and is one of Thailand’s major historical attractions.
The grandeur of Ayutthaya is reflected by numerous magnificent structures and ruins concentrated in and around the city island surrounded by the Chao Phraya, Pa Sak and Lop Buri Rivers. The area, well conserved as a historical park, has been included in UNESCO’s list of World Heritage since 1991.

Visit Wat Yai Chaimongkon. A large working wat, with ruins that appear on some of the well known photos of temples in Thailand. It features a large reclining Buddha in saffron robes in its own ruined wiharn, and, most spectacularly, a huge chedi swathed in golden cloth set in a courtyard which is lined by Buddha images all wearing saffron robes. Very photogenic.

Continue to Ayutthaya Ancient Palace, was original built King U-Thong in the 14 th century, and was expanded over the years. These pavilions were completely destroyed in 1767, leaving only brick foundation, porticos and walls.

Visit Wihan Phra Mongkhon Bophit. Phra Mongkhon Bophit, a large bronze cast Buddha image was originally enshrined in the open area outside the Grand Palace and later covered by a building in the reign of king Songtham. During the fall of Ayutthaya, the building was badly destroyed by fire. The one currently seen was reconstructed, but does not have as beautiful craftmanship as the previous one. The open area east of the sanctuary was where the royal cremation ceremonies took place.

Visit Wat Phra Si Sanphet. This is the most important temple within the Royal Palace compound and the original from which the Temple of the Emerald Buddha in Bangkok has been copied. Three outstanding Ceylonese style pagodas were built during the 15th century to enshrine the ashes of three Ayutthayan kings.

Lunch will be provided at riverside restaurant.

Across the Rivers to the south of the Island. Visit Wat Chaiwatthanaram, one of the most imposing ancient Buddhist monasteries, was established by the command of King Prasatthong in 1630 A.D. It is believed that the wat is located on the site of his former home. The reason for building this monastery was to make merit for his mother. Prince Damrong Rachanuphap noted that its architecture was similar to that of Angkor Wat and inferred that the wat might have been built to commemorate the king’s victory over Cambodia.

Depart for Kanchanaburi, located 128 kilometres (80 miles) west of Bangkok. It is Thailand’s third largest province with an area of 19,486 square kilometres. The provincial area is mountainous and has the west border next to Myanmar.  (2 hours drive) Visit JEATH War Museum, a realistic depiction of prisoner of war living quarters, with photographic, pictorial and physical memorabilia dating from World War II. Continue to Kanchanaburi War Cemetery. It contains the remains of 6,982 war prisoners (mostly the British, Dutch, Australian and American) who lost their lives during the construction of the Bridge over the River Kwai and the railway to Burma (the Death Railway). Then visit world-famous Bridge over the River Kwai, a part of the Death Railway constructed by Allied prisoners of war. Take leisurely walks around town and pictures on the world-renowned Death Railway. Train ride on Death Railway through magnificent scenery, passing over the original wooden viaduct constructed by Allied POWs. Lunch at local restaurant. Visit Soi Yoke Elephant Camp. Feeding the food to elephants at Soi Yoke Elephant Camp. Then experience exciting elephant ride into the jungle for 45 minutes past bamboo trees and hanging creepers. Continue the trip by taking bamboo raft adventure for 30-45 minutes along River Kwai back to the camp. Leave from Kanchanaburi pass green paddy fields, villages, and temples then return to Bangkok.  (2-2.5 hours drive) Overnight : Bangkok

Depart from Bangkok to Samut Prakarn Province. [1 hrs. drive] Visit : Erawan Museum Inside the huge three-headed elephant and its round base is a museum, Erawan Museum. The three storeys inside the elephant contain antiquities and priceless collection of ancient religious objects of Kun Lek Viriyapant who is the museum owner. He is also the owner of the Ancient City and The Sanctuary of truth. It started from his friend’s idea of apple-shaped construction, symbol of western religion, inspired him to build this building in the form of Erawan elephant, symbol of eastern religion. Ancient City It is a centre of replicas of important historical sites in the country. Here you car appreciate the splendours of Thailand in the past. The replicas of major historical structures, which exist or used to exist in the kingdom, have been constructed in both smaller and actual sizes. All structures are categorised according to Thailand’s northern, southern, northeastern and central regions. Visitors can either stroll or drive around the extensive area. Major historical sites in the Ancient City are Khao Phra Wihan (Preah Vihear), Prasat Hin Phanom Rung, Wat Mahathat Sukhothai, Phra Phutthabat Saraburi, Phrathat Mueang Nakhon, Prathat Chaiya, etc. The replicas were elaborately constructed in both smaller-scaled sizes, while some are in the actual size. Besides, it is a source of local Thai arts and culture which is disappearing from modern society. Those who wish to conduct research on the history of Thailand can study this at the Ancient City. Lunch at local restaurant. Visit Samut Prakan Crocodile Farm and Zoo The Samut Prakan Crocodile Farm and Zoo is now reputed to be the largest crocodile farm in the world. The Farm has over 30,000 crocodiles of different kinds, which are kept in various pits. There are daily shows which feature catching crocodiles with bare-hands and placing the Keeper’s Head in their mouths etc. Show times are every hour from opening to closing. Elephant shows are from 09:30 thru 16:30 hr. Transfer back to your hotel. Overnight : Bangkok

Free time until your private transfer to the Bangkok airport or extend your relaxing stay in Pattaya, Chiang Mai or Phuket. 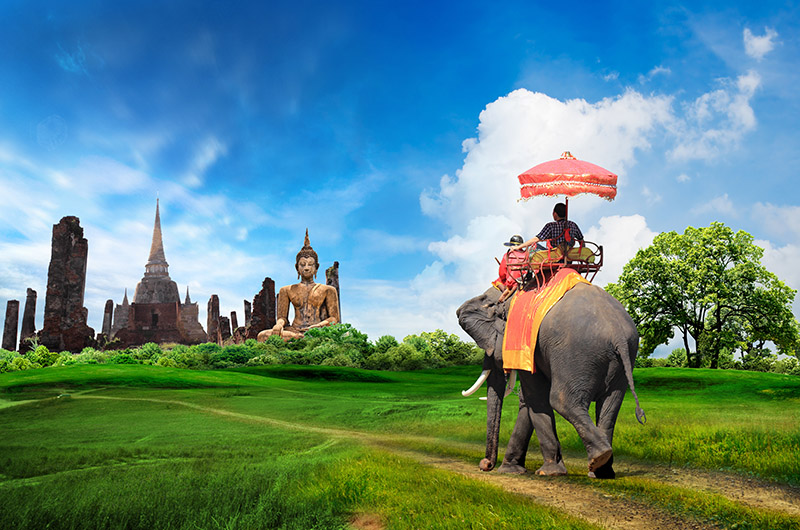 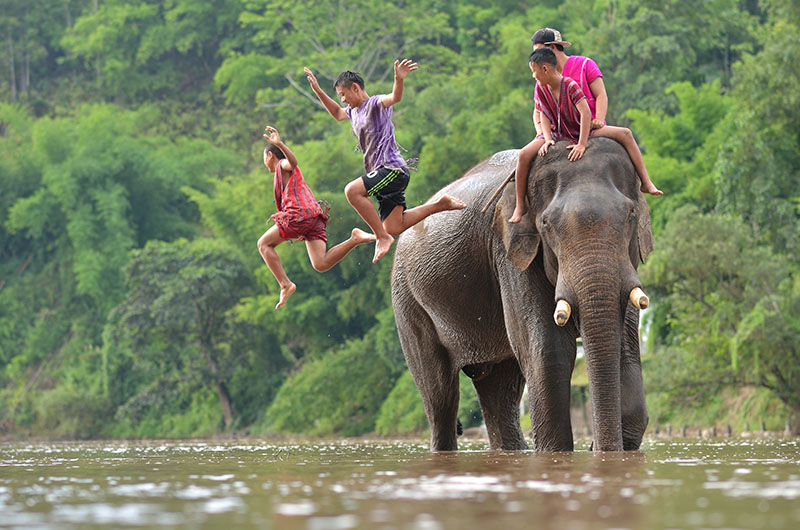 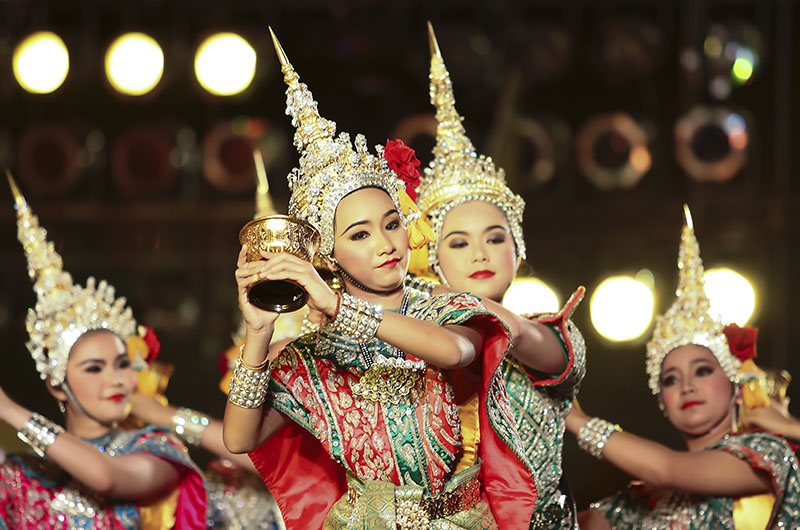 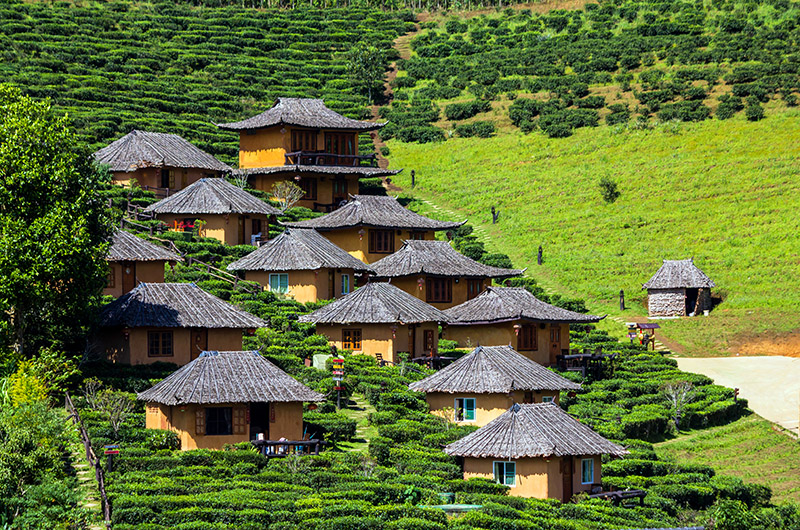 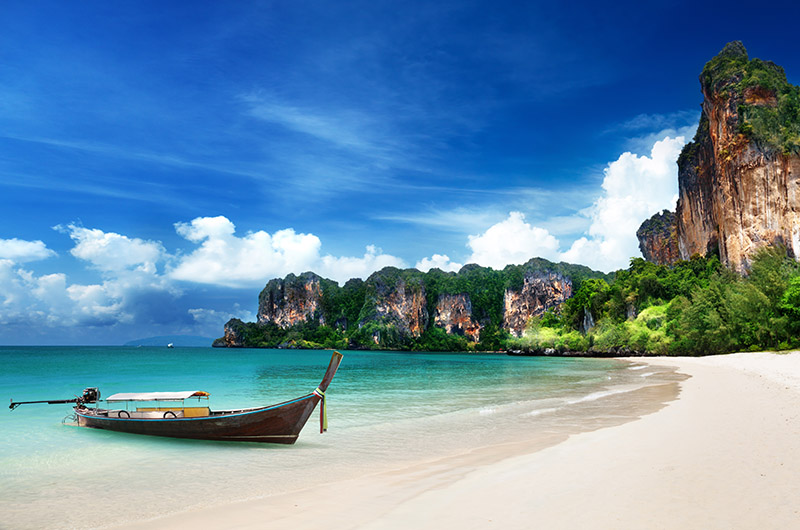